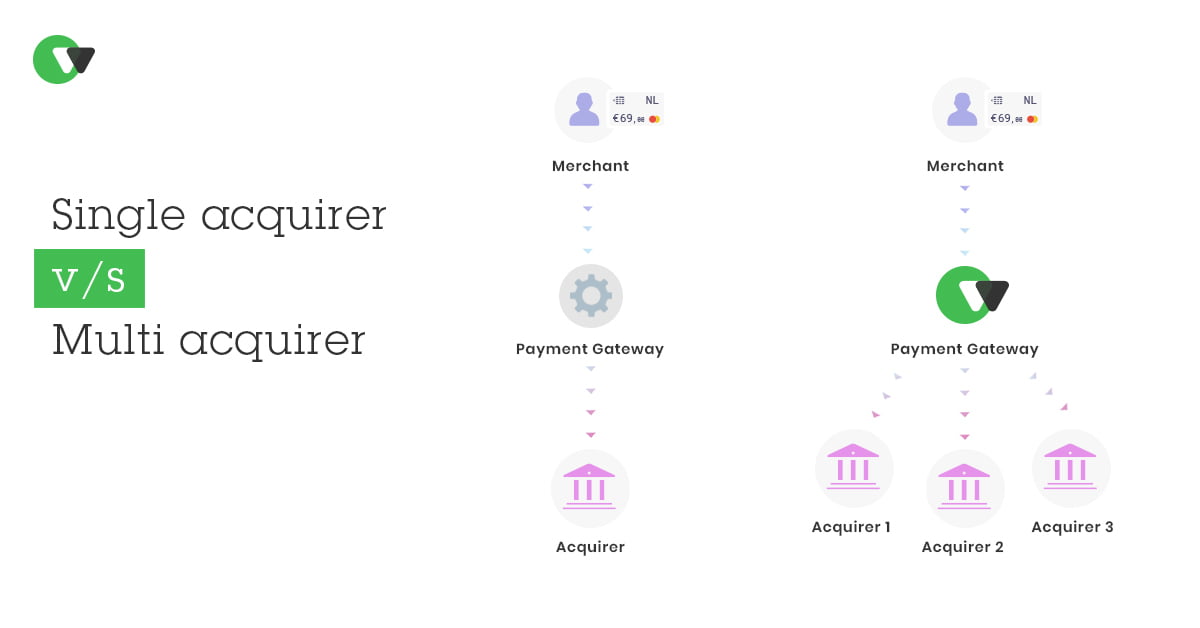 Working with a single acquirer solution

An acquirer specific approach is more of a traditional approach. It entails working with a single acquirer and often the merchant’s relationship with the gateway makes this mandatory. Specifically, the gateway will route all the transactions to this single acquirer with which it has partnered.

Though many times well equipped in providing merchants with an efficient Payment Orchestration layer, acquirer specific gateways are highly incentivised not to do so. They have no flexibility or routing capabilities and keep in the interest of the gateway’s chosen acquirer. Therefore it may not always be cost or conversion efficient for merchants in the long run.

There is also a certain amount of risk involved in terms of business continuity. The possibility of outages increases with this approach. People moving from offline to online due to the pandemic has caused a surge in online transactions. Some acquirers are not equipped to handle this kind of load, resulting in outages and servers being down. Even if the merchant has not faced a significant increase in their online transactions, they could still be affected. This is because the acquiring bank may have other customers whose load indirectly affects them as the acquirer’s entire system could face downtime. Hence it is important to understand that a single acquirer approach means being completely dependent on the acquirer.

Advantages of the single acquirer approach

In some cases, this approach may make sense as having multiple acquirers comes with its own problems. For starters, implementing multiple acquirers can complicate reconciliation and make the process more time-consuming. In contrast, a single acquirer approach would have a simple reconciliation process. The acquirer specific approach could also work well for a business operating in smaller regions. Moreover, only having to integrate with one acquirer could also mean a faster time to market. When a merchant’s flow is low and has not yet expanded across a large geographical area, an acquirer specific solution could seem like a more straightforward approach.

Working with a multi-acquirer solution

If we were to consider a multi-acquirer approach, as previously mentioned, it comes with its own set of challenges. Yet if a merchant were to use an independent payment gateway solution that took care of these complications there is a lot to be said in its favor. For example, in the case of more complicated reconciliation, partnering with a provider that offers automated reconciliation solves this issue. Moreover, the gateway could offer fast plug-n-play integrations with acquirers thus reducing the merchant’s time to market.

Read more on this subject in our blog Reconciliation and its importance.

Not being dependent on one specific acquirer also allows merchants to benefit from intelligent transaction routing  (ITR). Intelligent Transaction Routing also referred to as cascading transactions, has garnered some well-deserved interest over the last couple of years. It is essentially a flexible process engine that dynamically manages transaction flows. Via a payment gateway, ITR ensures that each transaction routes to the acquiring bank that is most likely to approve it quickly. In the case of a fail-over transaction, where the payment cannot proceed further, the system will automatically find a secondary acquiring bank that might authorize the transaction. Lastly, all retries happen in real-time and are invisible to the customer.

Read more on this subject in our blog: What you should know about Intelligent Transaction Routing (ITR).

Better control and autonomy over processes

In addition to this, a multi-acquirer approach is a perfect example of the saying “do not put all your eggs in one basket.” It is always smarter to spread risk across multiple acquirers in case something happens to one of them. This in turn allows merchants to have better control and autonomy over their transaction flow with other acquirers to fall back on. Overall this is also better for a company’s business continuity and ensures a business’s operations and core functions are not severely impacted by unplanned disasters that may take critical systems offline. Hence there is a decreased risk of payment outages and shutdowns.

When looking at a multi-acquirer approach it is important to understand what kind of gateway you are partnering with. Some gateways, though partnered with multiple acquirers may still have a bias towards one. While other gateways are what we like to call “acquirer agnostic”.

What it means to be “acquirer agnostic”

Being acquirer agnostic means not being tied down or partnered with any one acquiring bank. This allows one to process transactions across a limitless number of acquiring banks. If a gateway is not acquirer agnostic, merchants may lose out on business or have to accept unfavorable pricing. Whereas acquirer agnostic merchants can set up real-time rules for switching transactions to the best-suited acquirer. Not only can this dynamic routing optimize success and processing rates, but it also allows for failed transactions to be re-routed to the next acquirer. Overall the addition of Cascading, Automated switchover capabilities, and smart retries ensures that merchants do not have to worry about transaction failures or outages. Partnering with multiple acquirers through an acquire agnostic platform is essential for the optimized and uninterrupted functioning of payments.

The importance of payments in business continuity can be illustrated by the well-known Wirecard shutdown. This event resulted in huge business losses for the payment companies that lacked a multi-acquirer payment set up at the time of the shutdown. It can be concluded that partnering with multiple acquirers is essential for the smooth functioning of payments. It is always smarter to spread risk across multiple acquirers. More importantly, no single acquirer has the best success rates and costs for all countries hence using multiple acquirers according to the country improves these figures.

Thus, from an optimization perspective, being acquirer agnostic with a multi-acquirer solution is the way to go. At WLPayments we believe it is essential to be agile and offer an acquirer agnostic platform that allows for quick integrations with new acquirers without unprecedented delays.

PCI Compliance helps keep credit card payments safe and secure At WLPayments, we focus on providing a safe and secure environment for our clients to pay as quickly and frictionlessly as possible. One of the important pillars of providing a high level of service is to...

END_OF_DOCUMENT_TOKEN_TO_BE_REPLACED

Payments? We got you covered!The payments industry is continuously changing. Are you staying compliant? Here's how you can! Leave your questions Full Name This is a required field Organization Email type="email" id="email" required class="form-control"...