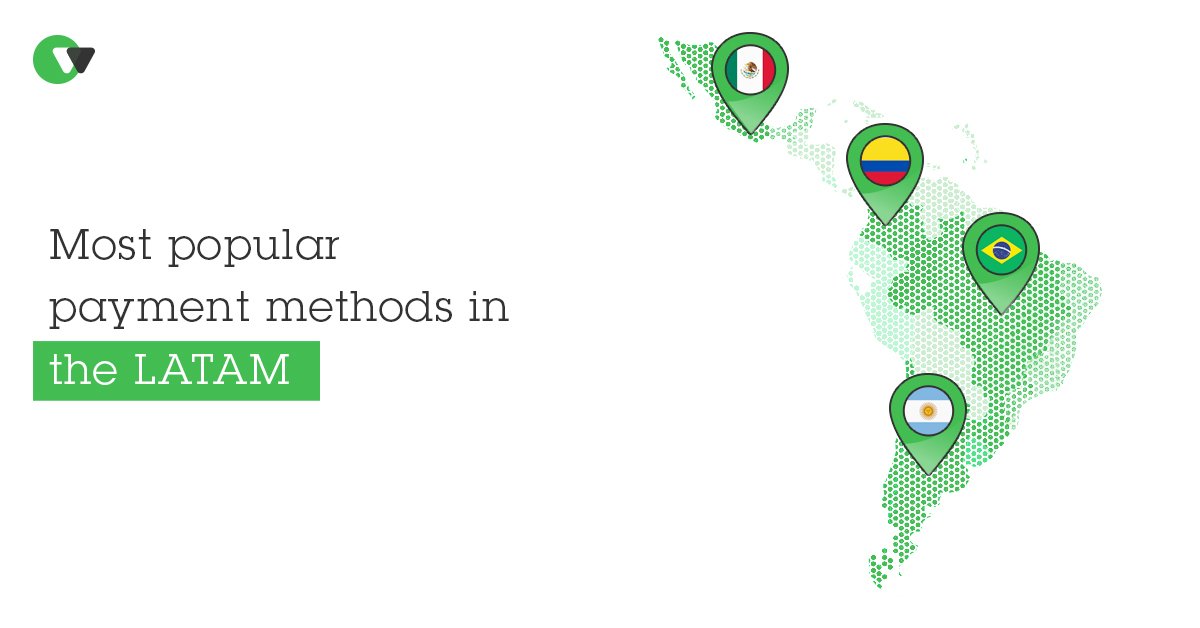 Most popular payment methods in LATAM

Although Latin America does not have the largest e-commerce market, valued at only 200 billion, it is certainly an interesting market to explore. In fact, according to the EBANX study, LATAM is the second fastest-growing e-commerce market in the world, surpassed only by the Asia-Pacific region. Therefore, it presents a huge growth opportunity for forward-looking businesses and makes for an interesting territory to explore in our “Most Popular Payment Methods” series.

The region’s largest e-commerce market is Brazil, accounting for almost one third (32.5%) of all e-commerce in the LATAM region. Brazil’s e-commerce has been expanding rapidly as COVID-19 pandemic increased the number of online shoppers by 25% in 2020. Thus, presenting an exciting opportunity for international merchants looking to enter the LATAM region.

Regarding payment methods, credit cards and cash dominate the market respectively accounting for 59% and 19% of all online transactions. For cards, the usual suspects, Visa and Mastercard, are also accompanied with local cards such as Elo, HiperCard and Aura.

As mentioned, cash is the second most popular payment method for e-commerce in Brazil, where Boleto Bancário dominantes. This cash-based payment method is regulated by the Central Bank of Brazil and allows shoppers to pay for online purchases with cash at banks, ATMs or other authorized locations such as drugstores or post offices. In fact, the word “Boleto” literally means “ticket”, an apt name considering its popularity among the masses. This popularity can be easily explained by the large proportion, 35% of the population being unbanked. It is now also possible to pay the voucher online on a banking app.

Another new and important addition to the payment sector of Brazil is the launch of PIX. In November of 2020, this instant payment system was introduced by the Brazilian Central Bank to allow round-the-clock payments. This enabled transactions to take place from one ewallet to another in real-time (hence referred to as “instant” payments”). A study carried out by BS2 Bank across Brazil found that 73% of the consumers polled intend to use PIX as a payment method. So though PIX is relatively new in the market, we expect to see a rise in its popularity across the country making it relevant to merchants wishing to enter the Brazilian market.

Finally, Digital wallets are the third most-used payment method, making up 14% of all transactions. This percentage is expected to increase in the future due to higher smartphone penetration. Here, the most popular wallets are Mercado Pago, PayPal and PicPay. Another important thing to know about digital payments in Brazil is that more than 60% of all e-commerce payments are made in installments.

Mexico is the second largest LATAM e-commerce market making up 28.5% of the region’s market. However, according to JP Morgan, Mexico presents “a double-digit growth opportunity for ambitious e-commerce merchants” as the country’s e-commerce has been growing at a compound annual growth rate (CAGR) of at least 20 percent each year since 2017. Certainly, these figures are impressive and illustrate the country’s large e-commerce potential.

International credit and debit cards, like Visa, Mastercard and American Express, are the most popular payment methods in Mexico, accounting for 65% of all digital transactions. This is likely due to the high cross-border spending of Mexican e-commerce compared to LATAM payments, which constitutes 31% of all online spending. Local credit and debit cards are also adopted by the general population like for example Banamex.

Also, just like in Brazil, low bank penetration means that cash is quite a popular payment method making up 20% of all digital payments. The number one cash payment method is Oxxo, which was developed by a Mexican convenience store to allow shoppers to pay for online purchases in any of the 13 000 OXXO stores in the country.

Similar to Brazil, digital wallets are also quite popular in Mexico. Paypal being the most popular, with Visa Checkout, Masterpass and MercadoPago also widely used in the country.

One interesting aspect of Mexican e-commerce is that mobile commerce growth has outpaced overall e-commerce, with most mobile purchases completed in-app. This illustrates the importance of having a payments platform that integrates seamlessly with apps and provides a frictionless mobile shopping experience.

Third country on the list, in terms of e-commerce market size, is Argentina, which makes up 8.5% of all e-commerce in Latin America. Nonetheless, this country is a powerhouse in the region as according to eMarketer it was the fastest-growing retail e-commerce market in the world with 79% growth in 2020. This certainly signals the country’s growing importance and its e-commerce potential.

In terms of most popular payment methods, credit cards are the most popular with a decent mix of both local and international brands. In fact, 45% of online transactions are made with credit cards, either with international ones like Visa and Mastercard or local ones such as Naranja, Cabal, Tarjeta Shopping, Argencard and Cencosud. Thus, one should clearly keep in mind the wide range of credit card options when entering the Argentinian market.

Following credit cards, cash and digital wallets both account for 18% of all online transactions. Once again,  as previously discussed for the other LATAM countries, Argentinians also have their own local cash payment options; RapiPago and PagoFacil. When paying online, both of these generate a voucher that can be paid for in cash at any network convenience stores. Lastly, digital wallets have exploded in this country with over 30 wallets in the market, but Mercado Pago still remains by far the most popular one.

Columbia is currently the fourth largest e-commerce market of LATAM and is worth 7 billion dollars. During the global pandemic their digital spending per person increased by 35% percent, presenting a promising opportunity for new businesses entering the market.

The most popular payment option in Columbia is credit cards such as Visa, Mastercard, Amex and Diners that are used for 42% of purchases and mostly with installments. In fact, Columbians are extremely comfortable with installments at the checkout – 70% of all online shoppers use installments. This is the highest percentage in the whole LATAM region. Hence it is important to note the significance of offering this option at the checkout page.

Moreover, bank transfers are another popular payment method in Columbia constituting 24% of all digital transactions. Here, PSE (Pagos Seguros en Línea)  is the most preferred as it allows shoppers to pay online using bank transfers and without a credit card.

Finally, cash payments are also widely used in Columbia, representing 15% of all online payments. However, Columbia differs from other LATAM payments markets in this aspect as there are several popular cash-based options in the market rather than just one. Effect, Via Baloto, Exito, Colsubsidio and Davivienda are some examples of this, although this list is still non-exhaustive. Hence, it is useful to keep this in mind when considering payments in Columbia.

Clearly, LATAM  is an interesting region to explore for international merchants with growth and expansion ambitions. After all, e-commerce is flourishing in all the countries we explored with most markets growing at double-digit rates. As we all know by now, it is important to keep in mind the most popular LATAM payment methods when entering these countries in order to attract local shoppers.

While the payment habits are quite similar across all countries; cards, cash-based payment methods and installments are still widely adopted with each country still presenting many significant differences. Every country has its own domestic options both for cards and cash payments: while Brazilians pay with Boleto Bancário, Mexicans use Oxxo, Argentinians prefer RapiPago and PagoFacil and lastly Columbians have several alternatives.

In conclusion the saying “no one size fits all” could not ring more true for LATAM payments. If you found this interesting, take a look at our other blogs from this series:

Things to consider when expanding to different countries

END_OF_DOCUMENT_TOKEN_TO_BE_REPLACED

All you need to know about payment orchestration